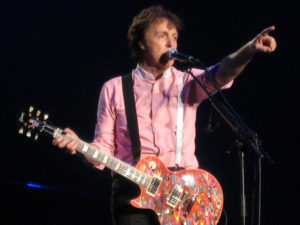 Paul McCartney launched his solo career after the dramatic breakup of The Beatles. While fans were devastated when the famous foursome split up in 1970, Paul McCartney and John Lennon launched successful solo careers. While Lennon is no longer with us, Sir Paul continues his crowd-pleasing musical career, first with the band Wings and then as a composer and singer-songwriter. He was inducted twice into the Hall of Fame, once as a member of the Beatles and then again as a solo artist!