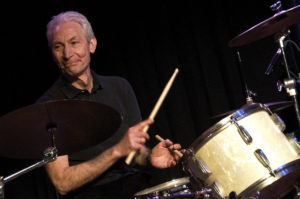 Not many rockers can boast of doing things drummer Charlie Watts has done. For starters, he has survived throat cancer in 2005 and still continues to perform his with jazz band Whenever the Rolling Stones are off the road, Charlie Watts jams it out with his jazz band in front of thousands gathered to see him live. The last album he recorded was in 2005, titled A Bigger Bang. In 2006 he was inducted into the Modern Drummer Hall of Fame.