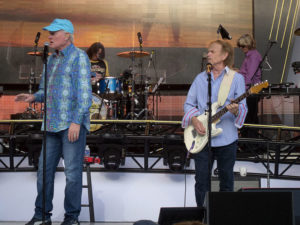 The third Beach Boy is still touring at the age of 74, Al Jardine has also had a successful touring career. He was inducted into the Rock and Roll Hall of Fame as a member of the Beach Boys in 1988. While best known as the band’s rhythm guitarist and not their lead vocalist or frontman, he released his own solo album, A Postcard from California, in 2010. Despite his age he was back in the saddle for the reunion tour and released another album, That’s Why God Made the Radio, in 2012! He also tours with Brian Wilson, as Mike Love tours as the ‘official’ Beach Boys with Bruce Johnson.