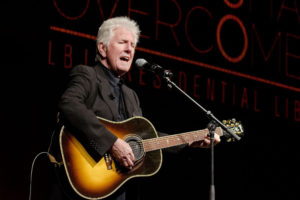 Another member of Crosby Stills & Nash rocking in his old age, Graham Nash has been making music since the age of 21 and still hasn’t stopped touring. This 75-year-old Rock and Roll Hall of Famer was inducted at the age of 45. Thirty years later he’s still making music and released Crosby & Nash in 2004. Even though the album managed to find only a niche audience, it didn’t stop Nash from going on solo tours and releasing a memoir.