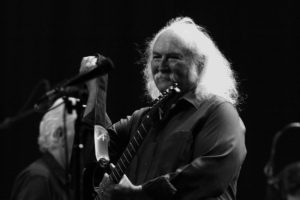 Two-thirds of the legendary hippie band, Crosby Stills & Nash are still composing music in their mid-70s. Apart from touring with David Gilmour in the recent years, David Crosby released a solo album titled “Croz” in 2014. After solo successes over the past five decades, this man has achieved it all. We have no doubt he’ll keep recording no matter how old he gets.