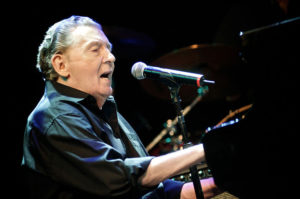 Age has certainly taken a toll on Jerry Lee Lewis’ appearance, but not on his love for music. This 81-year-old rocker still performs a tiny number of gigs every year, mostly songs from his recent album Mean Old Man (2010). His last top 40 hit came in 1971 with Me and Bobby McGee, after which he was inducted into the Rock and Roll Hall of Fame at the age of 50.